The Z-Wave protocol was developed by Zensys, a Danish company, based in Copenhagen, in 1999. At first they introduced a consumer light control system, which evolved into a Z-Wave, as a proprietary system with a chip home automation protocol, on an unlicensed frequency band. In the following years they released a 100, 200 and 500 series chips. The last ones are known as Z-Wave Plus, with four times the memory, improved wireless range, and battery life. The technology began to catch on in North America around 2005, when five companies adopted it. With an objective to promote the use of Z-Wave technology, they formed the Z-Wave Alliance.

In 2005 there were only six products on the market that used this technology. By 2012, as smart home technology was becoming increasingly popular, the number rose up to 600 products, available exclusively in the US, as of January 2019, there are over 2600 Z-Wave certified interoperable products, and we can buy them all over the globe.

This kind of technology ensures that devices can share information and allows all hardware and software that supports it to work together. Its wireless mesh enables any node to talk to other close by nodes, directly or indirectly, controlling any additional ones. Nodes that are within range communicate directly with one another. If they are too far from each other, they can link with another node that is within range of both, to access and exchange information 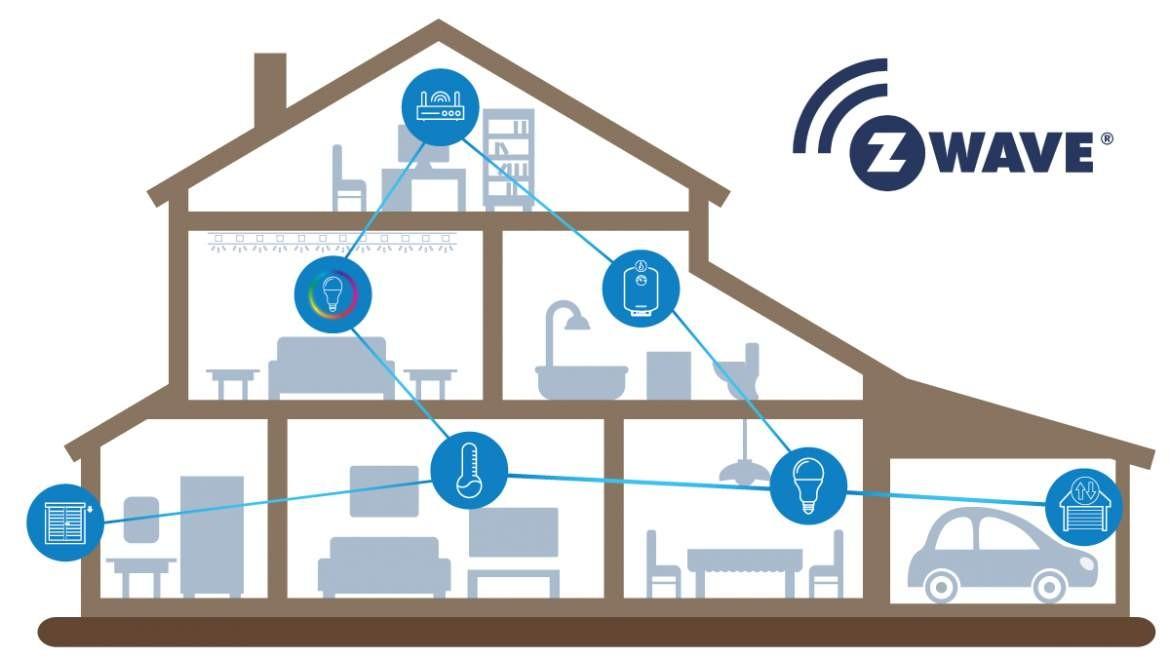 Z-Wave is a wireless communications protocol, designed and used primarily for home automation. It uses low-energy and low bandwidth radio waves, to communicate from appliance to appliance, allowing for wireless control of residential appliances and other devices, such as lighting control, security systems, thermostats, windows, locks, swimming pools and garage door openers. Any device that is permanently powered (not battery powered) will help building that mesh.

This kind of system can be controlled via the Internet, from a smart phone, a tablet or a computer, and locally through a smart speaker, wireless key-fob, a wall-mounted panel with a Z-Wave gateway, or a central control device, serving as both, the hub controller, and portal to the outside. There are only two basic things we need to get it started. A suitable controller and one or more devices. We simply connect our controller, configure the Z-Wave integration then add some devices using a control panel.

A Z-Wave integration for Home Assistant allows us to observe and control connected devices and requires a supported USB stick or module to be plugged into the host.

Smart Sensors detect changes in our home environment. They send us notification and status updates in real time, which enables us to, for example, set off an alarm or call the authorities, to prevent potentially harmful or unwanted situations.

Adding Z-Wave Motion Sensors to our home automation system will really bring the whole system to life. For example, doing so, we have to no longer manually control lights and remember to turn them off. We can use Z-Wave PIR sensors and motion detectors, to automatically activate the lights when we walk into a room, and turn them off when we leave. This type of sensors can also work with other home automation systems such as heating and security alarms. Our heating can be controlled based on whether we are at home or in a particular room. Additionally, our security system can use the same motion detector that controls our lighting. Z-wave outdoor motion sensors allow us to protect our home from the outside. They are all wireless and therefore easy to install.

A Z-Wave multi sensor is a small wireless device that typically runs on battery power, can sense motion using a PIR sensor and measures multiple environmental factors such as temperature, humidity, or light levels.