Screws and nuts firmly connect mechanical parts so that they can be, when needed, very easily separated. It does not damage the mechanical parts or the screws and nuts. Connections of screws and nuts are known as demountable connections. Screws and nuts are fitted with a thread outside or inside respectively. A self-locking thread has to have a small rise of the thread and the flank angle has to be large, which is achieved with a triangular profile. The most commonly used thread is a metricISOprofilethread. Depending on the pitch of the thread we distinguish between a fine or normal metric thread.

Metric screws are used in very different industries - the automotive industry, electronics, and furniture industries, and as a connecting element in the manufacturing of different appliances.

METRIC SCREWS MADE TO ORDER

Screws with a metric thread, which are generally known as metal screws, have threads evenly distributed alongside the cylindrical body of the screw. The pitch is expressed in millimeters and the angle of the thread is usually 60 degrees. That is why a screw with a thread diameter of 8 mm is marked as M8. Such a standard screw thread has a pitch of 1.25 millimeters per revolution. Metric screws with a standard metric thread are mostly used in general engineering, especially as mounting screws.

There are also metric screws with a fine pitch thread. The pitch in these types of screws is reduced, resulting in a smaller element burdening of the connections. Alongside the M marking, these screws have a pitch number added. For example, a screw with a diameter of 8 mm and a 1 mm pitch is marked as M8x1. 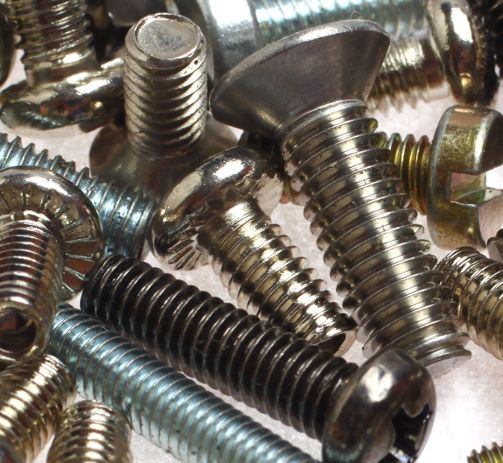 We, at Zakrajšek d.o.o., focus mainly on the production of rivets, bolts, axles, and screws. Among the latter the most common are metric screws or screws with metric a thread, which can be solid or half-hollow. All of these are manufactured to order and we also have our own tool making facility for the manufacturing and transformation of tools. Different materials are available for screws manufacturing and we also manufacture them in different sizes. Metric screws can be made with a diameter (thickness) ranging from 2.5 to 6 millimeters, and those can measure up to 40 millimeters in length.